We were driving from Sighisoara to Brasov and we decided to take a rather long detour 🙂 But it was totally wroth it!

So what is Transfagarasan?

Transfagarasan is world’s best road trip according to Top Gear. It is the second highest mountain pass in Romania after the Transalpina.

It runs trough the Fagaras mountains and it rises to a height of 2134 meters. It has many curves, therefore it takes a while to drive through. It took us 6 hours to drive the whole way and the last part was in total darkness while covered in the fog. The road is usually closed from October till June due to the snow that is blocking the road, so it is really good idea to check if it is accessible. During the winter months the Transfagarasan is only reachable up to Balea waterfall. From there is a cable railway up to the Balea lake.

The road was built in the early 1970s as a strategic military route by Nicolae Ceaușescu. The construction of the road had a high financial and human cost and according to rumors hundreds of soldiers died because of difficult conditions and dynamite explosions.

As the road goes through the mountains there are many tunnels, among them the longest and highest one in Romania (Balea Tunnel).

You can start the road in two places : Next to Cartisoara or a few kilometers after Curtea de Arges. We started in Cartisoara going south. However, if you decide going south you might risk that you will not be able to see all the things on the road. But there are no good or bad when choosing where to start. Both ways, from north or from south one, the views are just epic!!

We were both lucky and unlucky with the weather. Lucky, because there was no storm even though the forecast said so, unlucky because there was a lot of fog throughout most of the road;( We actually waited for two hours on the very top before we managed to see the epic view! When we finally saw how awesome it looks, it was really late and we didn’t make it to the dam or Poenari Castle.

Here you can see the difference between fog and no fog 🙂

Transfagarasan – out of fog

There are several stops along the road you should see (not to mention all the stops for epic photos!).

Balea Lake is the highest point of the Transfagarasan, right next to the longest tunnel in Romania. There is a parking lot next to the tunnel, so make sure to stop by. From this place you will be able to see the curvy road stretching in the distance.

On the parking lot there are a lot of stalls selling traditional Romanian food and other souvenirs. I bought some jar full of jam like content (it was really colorful, that’s why I bought it), that happened to be a veeeery sweet. I still have no idea what it was 😀

In the winter it is possible to visit the lake and spend a night in the ice hotel, that is made from the ice from the lake! It was the first building of its kind in Eastern Europe built in 2005.

Vidraru Lake is an artificial lake created in 1965 for the electricity production. Therefore, there is an underground power station. You can take a boat on the lake or try some extreme sports like bungee jumping. Next to the lake there is a dam, that is 165 meters high, 305 meters long and holds 465 million cubic meters of water. As the lake is so huge, for safety reasons dynamite has been placed in the mountains so if something happens to the dam and it breaks, the dynamite will be detonated and make a natural dam out of the rocks in the mountains holding the water back.

Unfortunately, we arrived there at night so I was not able to take any photos on my own;( The view was really nice though!

The Dracula Castle, dadadadaaaa! It is a ruined fortress built in 13th century that is located on top of the mountain. As the legend says, Vlad the Impaler saw the potential of the castle and decided to renovate it. As he knew some of the people from the nearby village were not on his side, he attacked them and impaled (duh!). After that incident, the rest of surviving people swore their loyalty and started rebuilding the fortress. The task was so hard however, that many of them died of exhaustion.

There is one more legend about the castle. It is about the Vlad’s first wife that took her life jumping out of the castle. She did that because she was afraid of being take hostage during turkish siege. After the jump., legend says, the river that passed nearby got all red from the blood. Since then, the river is called The Lady’s River.

There is a parking lot close to the trail to the castle. To get the fortress you need to climb 1,462 steps! I heard it is worth the climb! 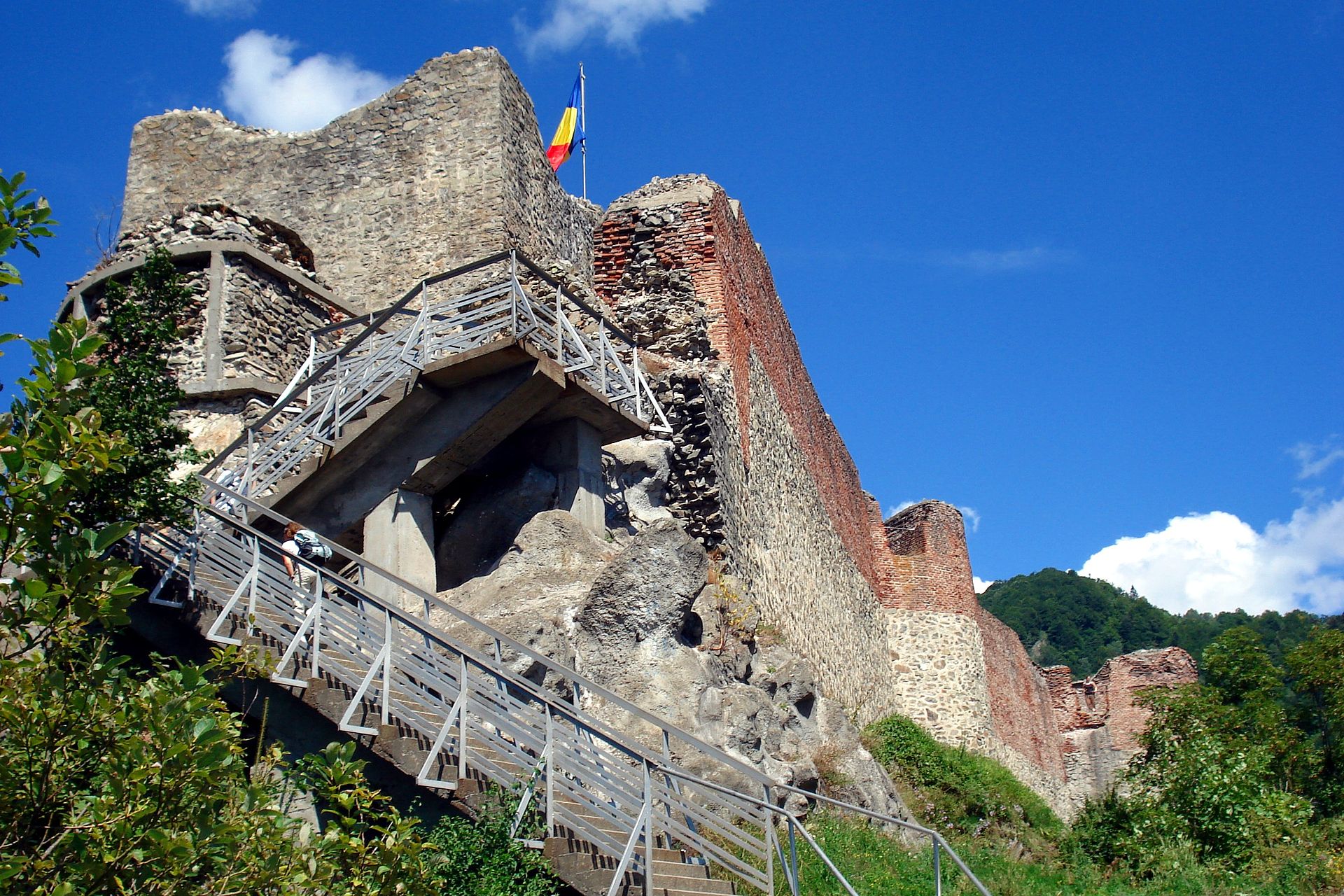 When we were driving near the castle it was dark, there was full moon, fog was all around us and then the bat flew by. Spoooky!! 😀