Esbjerg is the seaport city that you probably recognize from the 9m tall statue – Men meets the sea. 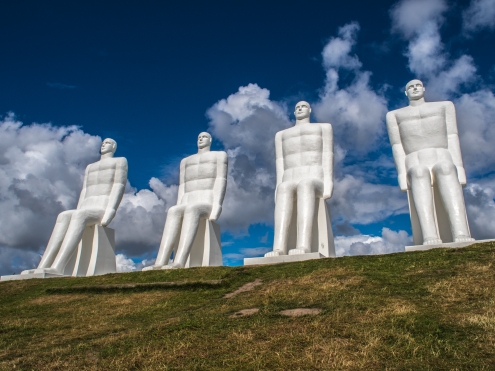 The city itself is nothing spectacular, however the fact that it’s located next to the North Sea and the Wadden Sea National Park, is what makes the place amazing.

5 things you have to do in Esbjerg:

Go for a stroll at the beach around Men at sea. During low tide it’s possible to see mussels even 300 meters from the shore! But be carefull not to wander too far into the sea as you might get surprised by a high tide.

There was only an hour difference between those two shots and you can see how big the water difference is!

The views are amazing, especially when you know where the water was just couple hours before. Thanks to it being gone, you can observe how the sea life looks: crabs, oysters and other mussels.

Can you imagine?! Seals in Denmark?! When I heard about that, I was like “I am so going to see them!!“

So I hopped onto the ferry for a 2,5 hours trip around the harbour, and if you will be lucky with the weather (and I was sooo lucky!!), you might get  chance to spot some seals in the Ho Bugt bay.

The harbour is humongous and spreads over 10km covering 3.5 million m2. It used to be just a fishing port but nowadays has become Europe’s leading port for shipping offshore wind turbines.

After 2 hours of  going through the port you venture into Ho Bugt bay where you can spot seals that are sunbathing! The ferry stops for couple of minutes so there is plenty of time to take pictures!

If you want to know more about the seal safari and the ferry timetable and prices, check out this link.

After taking seal safari it is possible to disembark the ferry on Fanø island. After spending there some time you can take a normal ferry back to Esbjerg for free. It departs every 20 minutes, so you don’t have to hurry with the visit.

The island is charming and if you have time you should definiately take a bike trip around!

If you want to have possibility to see different kinds of  deers close up, you should definitely check out Nørreskoven in Esbjerg. They are inhabiting a huge area of a forest and meadow so you might have to walk a little to find them, but this is really worth it – and yes I am a city girl, so any animal walking around outside a cage is a huge deal ! 🙂

Next stop on the roadtrip: Ribe

11 thoughts on “Roadtrip in Denmark: Esbjerg”